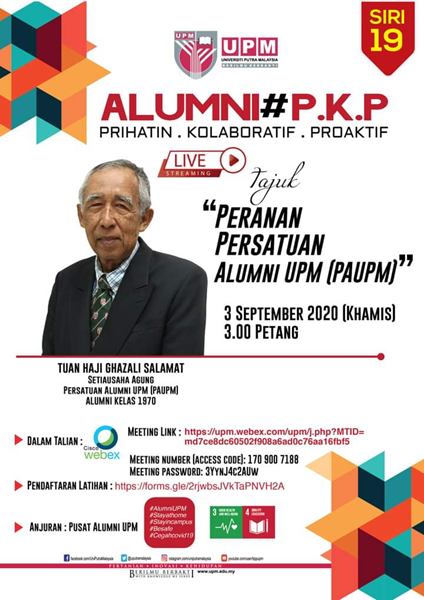 SERDANG, 3 September - The Alumni Relations Centre (ARCUPM) has organised a programme in the form of knowledge sharing during the implementation of Conditional Movement Control (MCO) period in an online series. The 19th P.K.P Alumni Programme entitled The Role of the Alumni Association of UPM (PAUPM) presented by Tuan Haji Ghazali Salamat, alumni of the 1970th class as the Secretary-General of PAUPM, was also attended by Dato' Raihan Sharif, President of PAUPM.

According to Tuan Haji Ghazali Salamat, the association was formerly known as the Association of Former Students of The Malayan Agricultural College before being changed in 1998 to the UPM Alumni Association following the change of university name. PAUPM was also officially registered at the Registrar of Societies (ROS) under the Societies Act 1966 on 29 June 1971.

He added that PAUPM has 5 main objectives, namely The Close Relationship between Members, Good Relations between Alumni and UPM, Helping UPM achieve its Objectives, Contribute to society and the Nation as well as Sports, Recreation and Welfare. These five objectives are aimed at enhancing and upgrading the compilation of UPM Alumni especially to younger graduates.

He also explained the contribution of PAUPM such as conducting seminars and workshops to expand agricultural and business knowledge to the community. Such as The Harumanis Seminar, the Empower Agriculture Empowerment Workshop in UPM as the Catalyst for the Development of National Agriculture and Hybrid Coconut Farm Management Seminar. Besides, PAUPM also plays a role in tracking alumni who have the potential to serve in UPM.

According to Dato' Raihan Sharif, PAUPM has high expectations of a younger Alumni leadership together to develop Universiti Putra Malaysia to expand its network internationally. This is because, PAUPM is an association that organizes social, welfare and sports activities for the preparation for UPM students who will face great challenges during their employment.

Sharing from the P.K.P Alumni programme clearly demonstrates PAUPM's efforts in helping UPM achieve its objectives. Therefore, PAUPM's main contribution is through educational excellence, research and service to create graduates of UPM internationally and contribute to society and nation.

Meet and Greet with Norzack Scholarship